The Meaning of Eagle Festival

Contents hide
1 The Meaning of Eagle Festival
2 The Eagle Training Lasted For Several Years
3 Mongolia Eagle Festival
4 The Moving Story Of The Hunters That Inspired The Expert Performances
4.1 About Go Mongolia Tours

The Mongol people live a nomadic lifestyle and are closely allied with horses and eagles. One of the iconic pictures of Mongolia is the Mongolian eagle pursuing a hunter over the plains.

The Mongolian Altai area is reputed to be the world’s most distant place. One of the world’s most barren regions is the Altai Mountains, which extend from Siberia in Russia all the way to the Gobi Desert in Mongolia. Here, eagle hunting is a tradition among the Kyrgyz and Kazakhs. In Central Asia, they have been raised and taught for 4,000 years to hunt alongside people. Along the frontiers of Mongolia, China, and Russia, the ice-covered peaks of the Altai act as an impassable wall. appears to preserve Mongolia’s traditional cultural history. 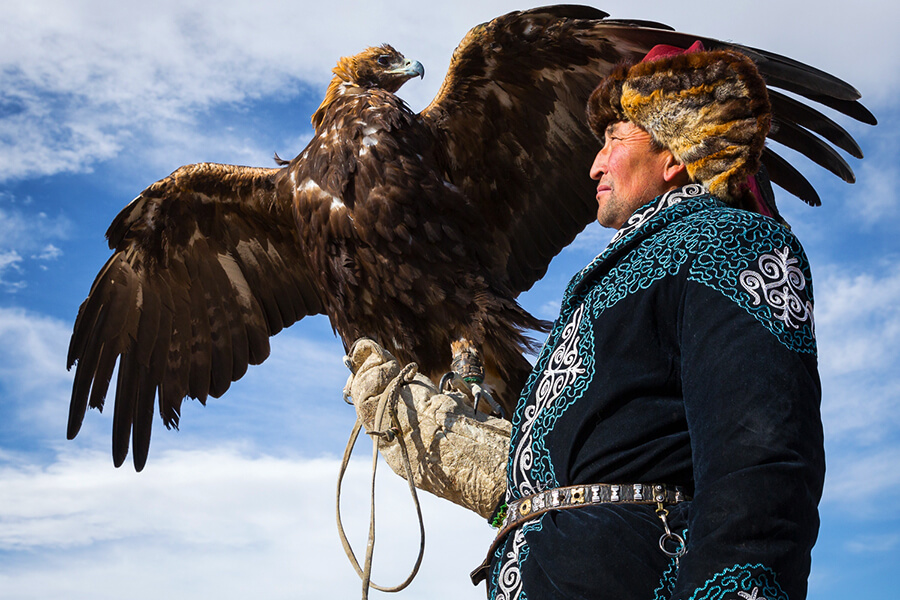 The largest minority in Mongolia is the 100,000 or so Kazakhs. Typically, they reside close to the Altai Mountains. Because birds frequently get heart attacks when exposed to noise, such as vehicle horns or sirens, hunters and eagles avoid bringing them to populated areas.

The skill of taming eagles for hunting has been passed down from generation to generation as a Mongolian tradition over the course of its 6,000-year existence. Usually, the progeny are chosen by those who train Mongolian eagles. due to the fact that female eagles hunt more shrewdly and viciously.

By giving the eagles food with their hands, hunters gain the birds’ confidence. The hunter sees eagles as being no different from kids. The eagle flying off during the hunt is not a concern for hunters. because they are aware that eagles always regard them as family. The eagles actually love their owners, want to be with them, and are willing to die for them, according to local hunters. 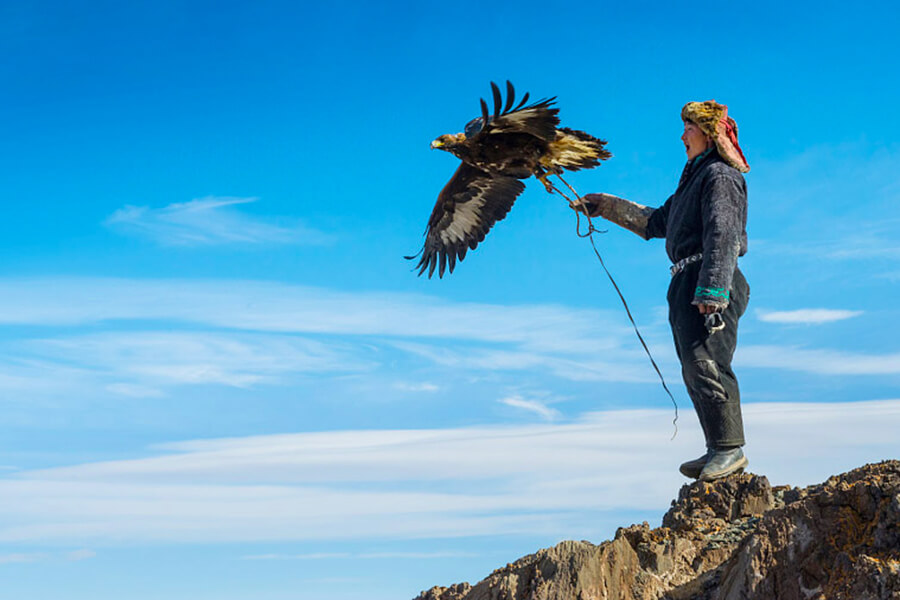 The Mongolian eagle trainers are celebrating with a feast right now. Through this event, there is a chance to showcase the national identity and cultural attractiveness of the Kazakh people to potential visitors.

The personalities of eagles are powerful and independent. To develop a bond of love and trust between the owner and the eagle, training must begin when the animal is still a juvenile bird. Young birds will be simpler to train and won’t hurt the kids or the animals they are taking care of. For protection against the chilly and brutal winters, hunters and worshipers use hunting eagle belts.

It requires patience and might take several years to educate Mongolian eagles. After training, the owner and the eagle have a very tight bond. Any slight alteration in the eagle’s behavior will alert its owner to the presence of the prey.

Foxes are the main target of the hunt since they give the hunter poet both meat and warm garments. When an eagle can outsmart an owl, a wolf, or even a snow leopard, it has enormous power.

The hunters will come up with a method for the eagles to practice being nimble in the early snows of the season that are not thick enough to quickly find prey. By throwing some meat down the slope, then removing the eagle’s eye patch to let it hunt. They frequently tie an eyepatch for the eagle in order to assist it to relax and quiet down. 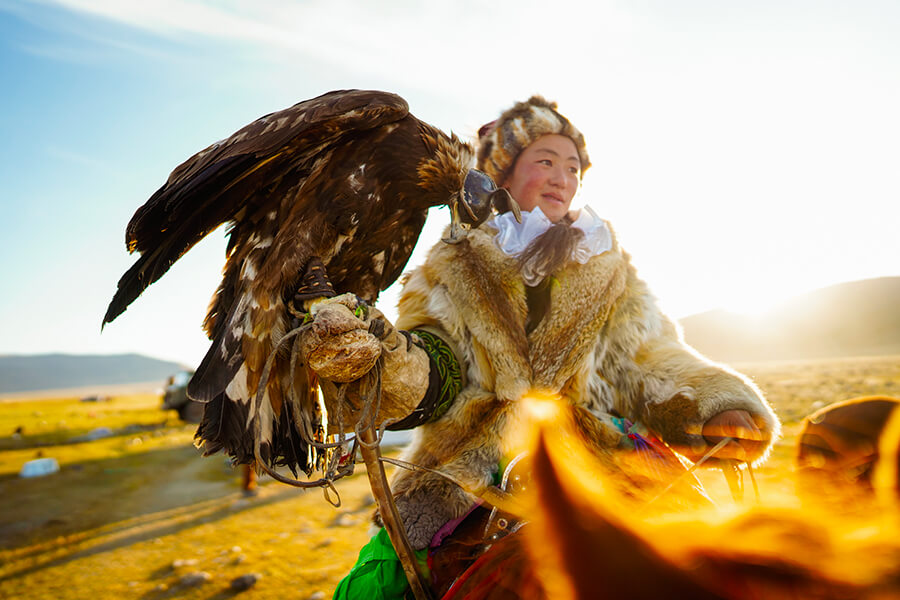 In the winter, when foxes and animal trails are visible in the snow, hunting typically takes place. Standing on the ledge and gazing downward, the eagle. The fox was ejected from the cave by the hunter below, who made a noise. The eagle will immediately stretch its wings when it spots the fox and descend to bring the animal closer to its master. Eagles and hunters thrive in the untamed area between the mountains and the chilly wind in the valley. Eagle hunting has developed into a skill that is passed down from one generation to the next. Eagles are not under the authority of hunters; rather, they interact and work together as true partners.

Every September, Olgii hosts a fantastic event for hunters and their eagles that draws hundreds of competitors and a large crowd of spectators.

This celebration features traditional Kazakh sports like pulling ko on horseback, tenge alu, etc. in addition to eagles showing off their hunting prowess.

Couples can also meet at this event as a way to get to know one another. If the male wins a contest with both ladies, the girl will kiss him; if he loses, the girl will ride a horse, tie him up with a whip, and display the crowd while laughing at him.

There are no longer any hunts since there are so many cattle grazing on the savannah in modern times. The hunter still values and adores his eagle, though. They are then released into the wild after ten years of wandering with their masters.

The Mongolian Eagle Training Festival reflects highland Mongolian culture. It is an opportunity for gifted brothers to display their family’s abilities as well as their love and commitment to protecting the nation’s cultural diversity.

When visiting Mongolia during this festival, you may take in the lovely action sequences and the nearly perfect harmony between the birds and their masters. It was really exciting and tense.

The scoring criteria for the competition call for extensive hunter training methods and eagle hunting expertise. Eagles must possess the ability to hunt and catch prey quickly and precisely. Additionally, the visual value of the outfits worn by hunters is evaluated. Many different traditional Kazakh outfits will be shown.

The Moving Story Of The Hunters That Inspired The Expert Performances

Talented hunters were taught the knowledge and abilities of eagle training from a very young age, just as horseback riding and archery. Every individual has the tenacity and zeal to maintain their passion. Not only does it take a lot of time, but it also develops a fantastic intellect.

There are still some females who have the same zeal as the boys despite the fact that this is a vocation that favors men and calls for health and strength. They adhere to the custom that has been passed down orally from father to son for countless years.

To be able to train and hunt well, Kazakh people must sacrifice their youth, their health, and a lot of work.

A celebration has well displayed the liberated and robust beauty of the wandering steppe children. Visit the event once to appreciate the region’s distinct natural beauty and its inhabitants’ cultures.

“A holy bird is the eagle. Treat them as though they were your own kids. Respect and love them. They would do anything for you if you do this” – a 92-year-old village hunter said.